My 2 Cents: It really does seem that people have gone a little tablet crazy but this is a really nice design but you got to worry about battery life.  If it does come out to ~ $1,000.00 then it does sound too nice.

A nice things is that since it is a version of Linux it will be able to run flash on it which it a little bit of a plus especially if you are trying to compare it to the IPad.  But being dual-screen and 14” its pretty much in a class of its own 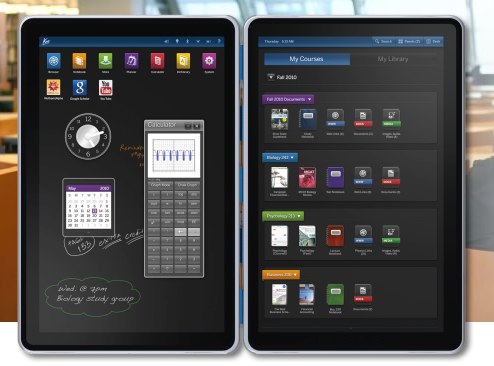 A company called Kno, Inc. has announced its flagship product, simply dubbed the Kno. The device is two large 14-inch touchscreens joined by a hinge that specifically targets the education sector.

[hidepost]Earlier we dinged the Dell Streak for being a bit on the small side, but the Kno tablet seems to suffer from the opposite problem. Announced at D8, the Kno weighs in at 5.5 pounds and more than an inch thick, rendering it comparable to a laptop but with two screens instead of a screen and keyboard.

The company refers to the device as a “digital textbook platform” and has partnered with publishers Cengage Learning, McGraw-Hill, Pearson and Wiley to produce content for the Kno in a beta program that will kick off at major U.S. colleges and universities this fall.

Based on Linux, the Kno also boasts support for Adobe Flash — a hot topic right now since that’s something the iPad doesn’t include. Developers are encouraged to participate in building out a third-party app store for the device.

As for pricing, all we know is that it will be “under $1000,” which already sounds too high. Check out a demo video of the Kno and a few more screenshots below, then let us know what you think: Will students be interested in picking up a device like this? If so, would it be in place of or in addition to a laptop or desktop?